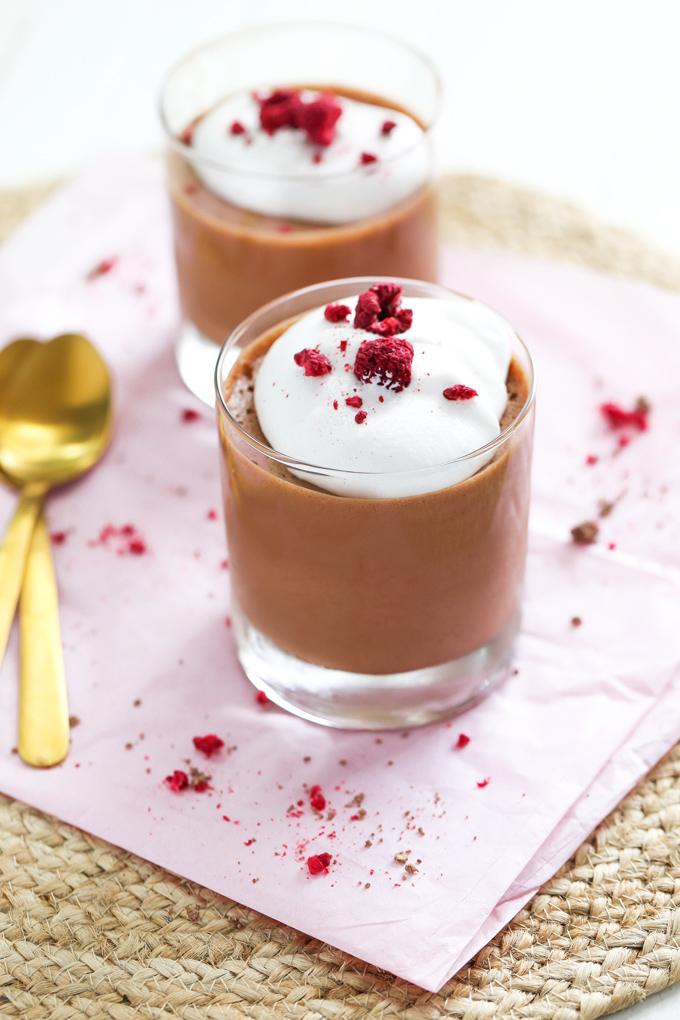 This 2 ingredient vegan chocolate mousse is by far one of my favorite chocolate desserts. It’s oddly light and fluffy at the same time, super chocolatey, hitting your sweet spot automatically and allowing you to snack away without the guilt. Literally. 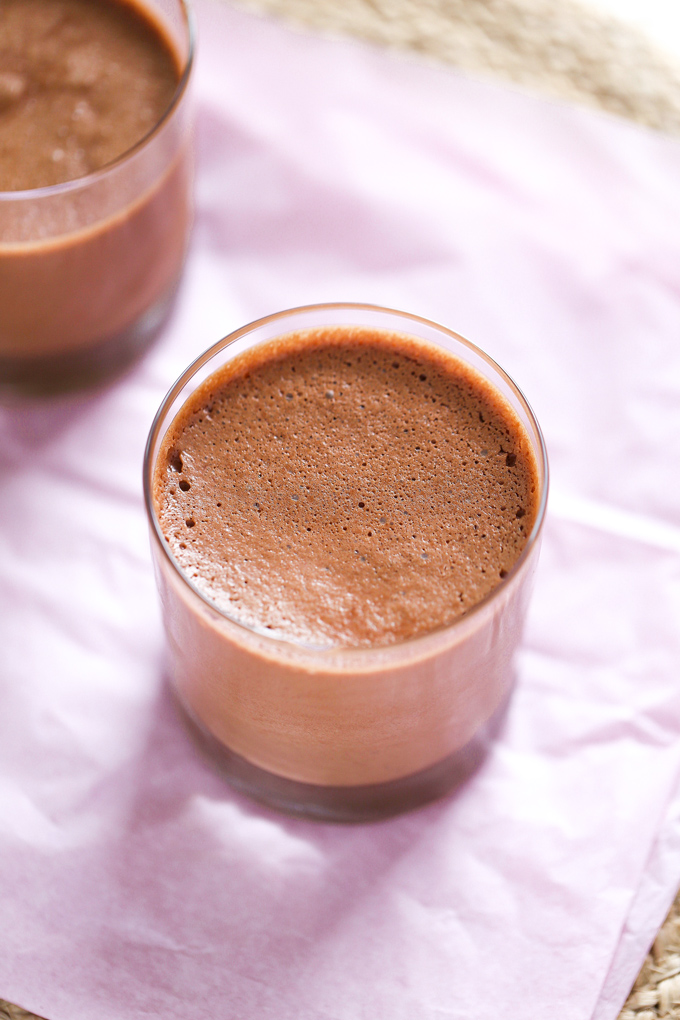 But how is it made with only 2 ingredients and what gives it it’s mousse like consistency? My first time ever using….Aquafaba! Yasss the liquid you get from chickpeas (or any white bean) turns into stiff white peaks just like egg whites do after mixing it with a stand or hand mixer. Seriously it’s genius and I’ve seen it done before and kept thinking to myself “ok I have to try this” and finally it took a chocolate mousse to get me. 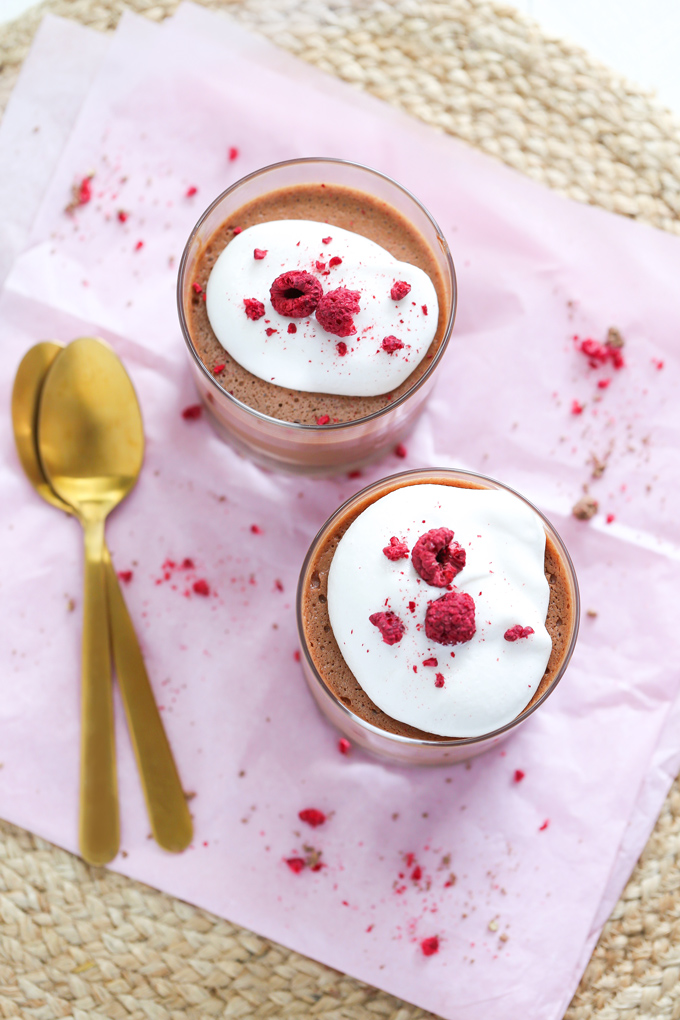 So what is aquafaba and why is it so popular in vegan baking. Well it’s “bean water” technically and it’s the next best thing next to real eggs for egg replacements because it acts just like an egg would. Since it’s discovery, vegan cooks and bakers across the globe have had their hand in this amazing deliciousness that we’ve been discarding for so long! Not to mention the health benefits. If you think chickpeas are healthy or white beans in general are, don’t think for a second this bean water isn’t packing it’s own healthful punch either. But keep in mind since this is new to the scene there hasn’t been that much research on the nutritional value, but what we do know as of now is that this is not something to just throw down the drain. Especially now with egg replacers being so expensive and beans being inexpensive, you basically get two in one with a chickpea purchase.

For starters the calories are only about 3-5 per tablespoon. Which if you do count cals that’s generally not a lot. According to TheTrimDownClub:

While aquafaba yields only ⅛ the energy of chickpeas and a trace of the carbohydrates (which includes soluble fibers), it yields about ¼ the protein, with the same distribution of essential amino acids, and fat, with minimal saturated fat and nearly ⅔ the beneficial omega-3 and omega-9 unsaturated fatty acids of chickpeas. B-vitamin levels in aquafaba range from ⅔ the amount in chickpeas to two-fold to five-fold! Water-soluble essential minerals range from just over ⅓ the amount in chickpeas to ⅔ to slightly more. Other essential nutrients reach ⅓. And because it’s a plant-based food, it goes without saying that it is free of cholesterol, unlike eggs, which have earned an unjustified but terrible reputation over the years due to the high amounts of cholesterol they contain.

And what about the “non”-essential phytonutrients associated with unique health-supporting properties of chickpeas? Saponins, pectins, and antioxidant compounds found in the bean husk are leeched in cooking water—meaning that a notable proportion may be reclaimed in aquafaba. Saponins and pectins are believed to be the very compounds associated with the foaming and gelling that contribute to meringues, fondants, and other delights that would otherwise require egg, and have been linked to improved cardiovascular markers. Some of the sugars and soluble fibers have been suggested not only to improve digestive function, but also to normalize metabolic health by supporting the increasingly acknowledged “satellite” immune and hormone systems in the intestines.

Also keep in mind that if you’re generally sensitive to chickpeas or white beans and it gives you stomach discomfort, the bean water may have the same effect.

Besides the related health benefits I don’t think you need more of a reason to eat some vegan chocolate mousse right!? I mean I had myself at 2 ingredient anyway. 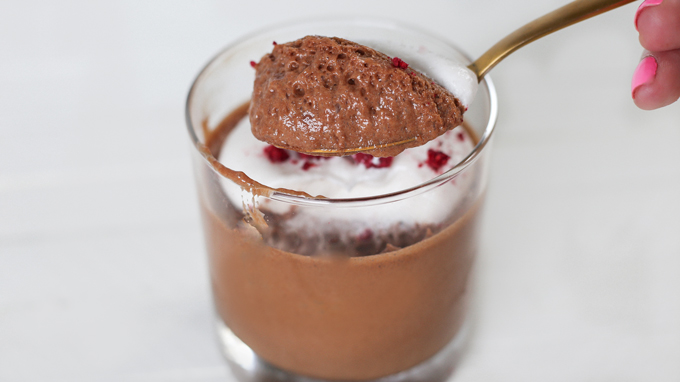 Now that we got past all the scientific health jargon — Do you see how ridiculously awesome that looks!? Well I promise you, it tastes as good as it looks. And you know I don’t play around with my desserts or snacks especially when it comes to chocolate.

I used a vegan dark chocolate but any chocolate you fancy will work. I was even thinking next time to use one with almonds or coconut or maybe both! My mouth is watering just thinking about it. Perhaps the the pregnancy cravings too. With this pregnancy I’ve been craving sweets. Well to be honest I don’t know if I can blame these cravings entirely on my bun in the oven. #LOL 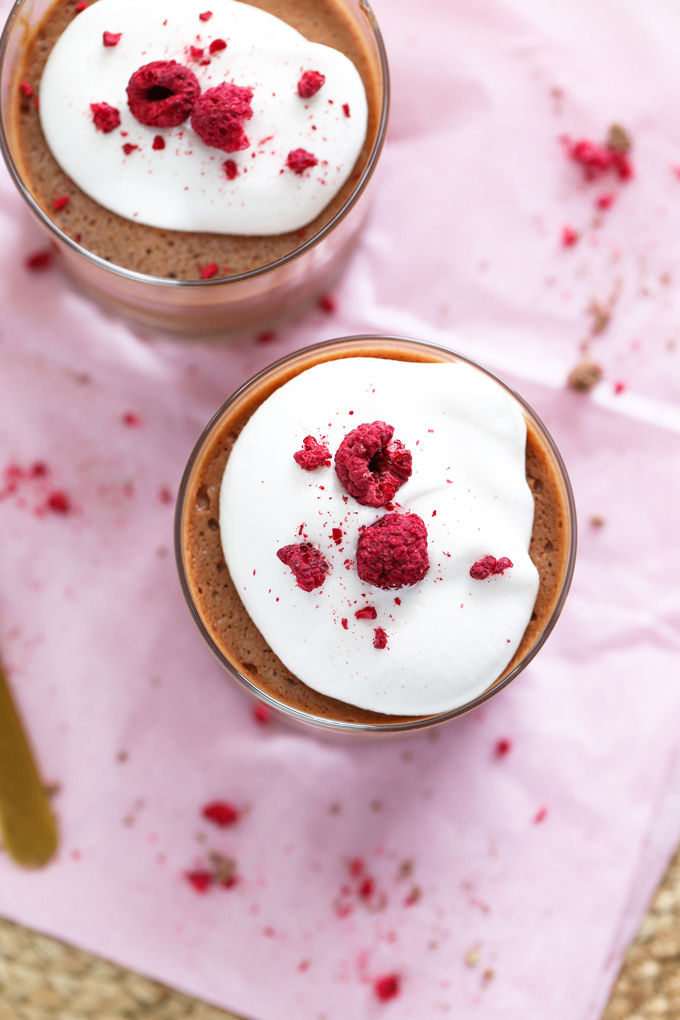 I put together this video to show you how easy and awesome this recipe is. I find that step by step tutorials really help in taking away the intimidation factor when it comes to all things plant based and vegan.

I’m so excited to share this with you and my new found love for “bean water”. Just a quick tip before we head to the recipe, it takes about 15 minutes to whip up with a hand mixer but it’s faster with a stand mixer. It also smells like chickpeas, hardcore, but doesn’t, at all, have any taste whatsoever of the bean or water itself in the recipe so don’t be turned off by the smell. Maybe it’s because I’m extra sensitive to smells these days but it sorta made me nauseous while I was mixing. But that quickly passed when this dessert came together and there wasn’t even a trace or hint of it. Enjoy! 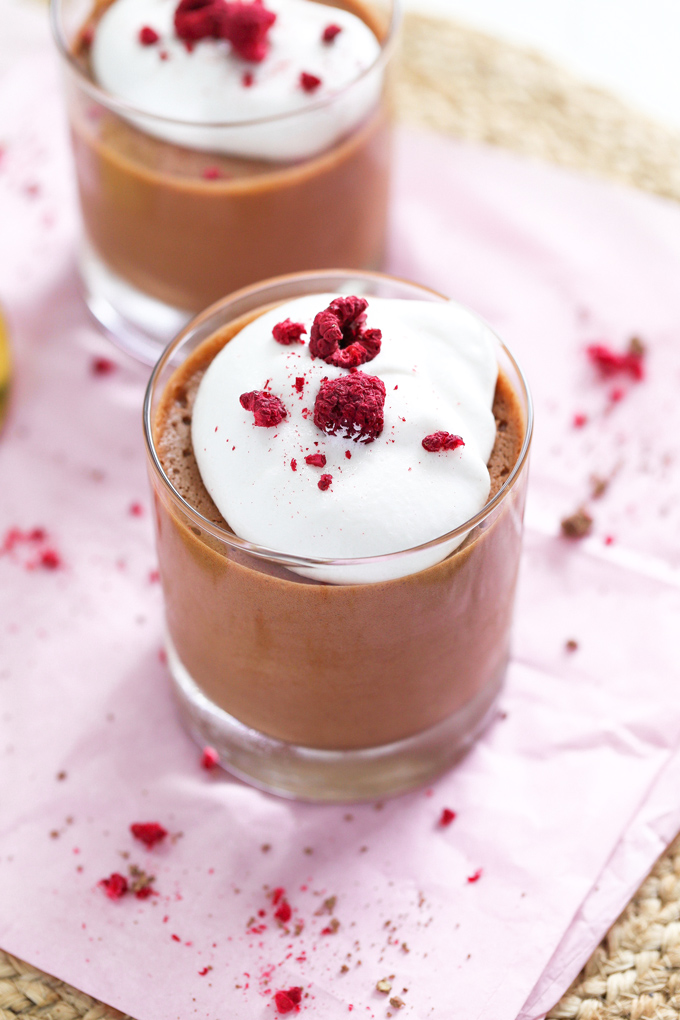 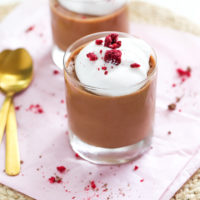 Recipe comes with a VIDEO TUTORIAL (see above) Creamy chocolate and delicious dessert made with only 2 healthy ingredients. Perfect to satisfy your sweet tooth and kid approved for snack time. 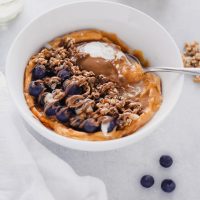 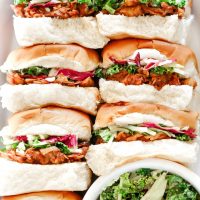 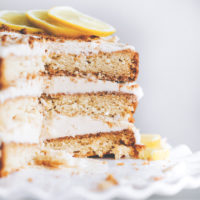