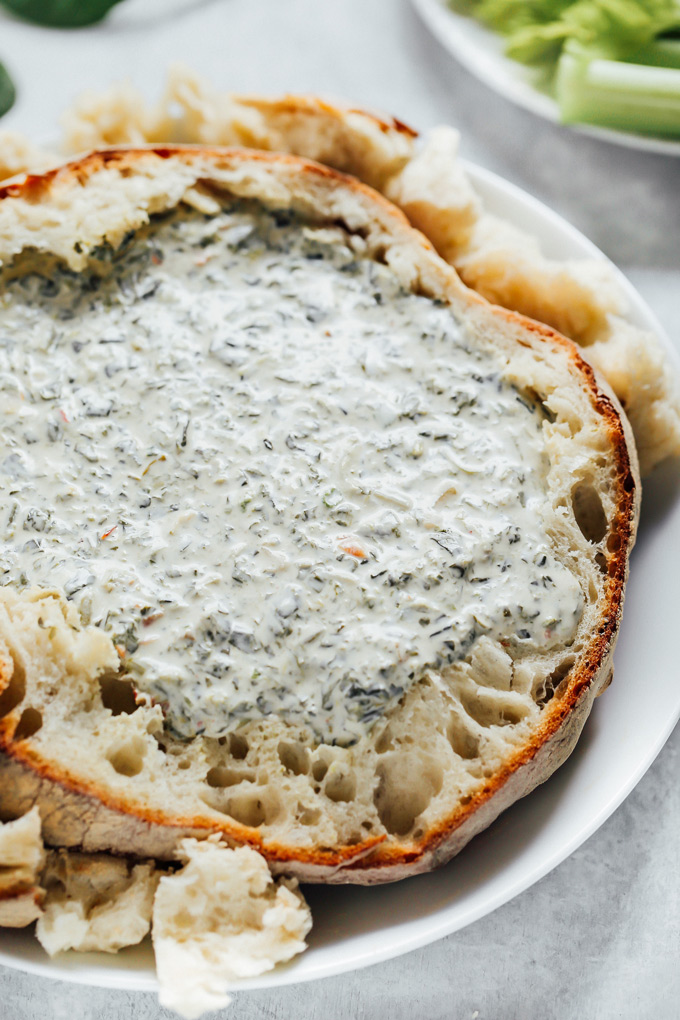 We got Vegan Spinach Dip in the house, heeeeeey! Going face first right into this deliciousness come Christmas morning. Actually, I’ll make this for Christmas eve so we have it for all the things.

If you don’t have many people coming over this amount will be perfect (see recipe card) and can last you up to 5 days (as if that ever happens)! However, if you are hosting and having tons of peeps in your crib I suggest you double this bad boy so no one leaves a hungry. Not that they would, just saying everyone loves them some spinach dip and it ain’t no fun if your mom homies can’t get none. LOL

Can you tell I’m super giddy? I just get overly excited this time of year. Also I know you guys know that I know that this is a bread bowl. Bread is an absolute hell no on a keto diet. BUT…I’m not being so strict right now up until the new year. I mean, this doesn’t mean I’m going to shove my face with lots of brownies and breads (maybe it does who knows) but I just don’t feel like being so strict with myself right now and that’s ok. I’m halfway to my goal and I think for me personally taking a week “off” is what I want to do and I’m good with that. Phew…now that we got that out of the way, let’s move on to all things spinach and creamy. 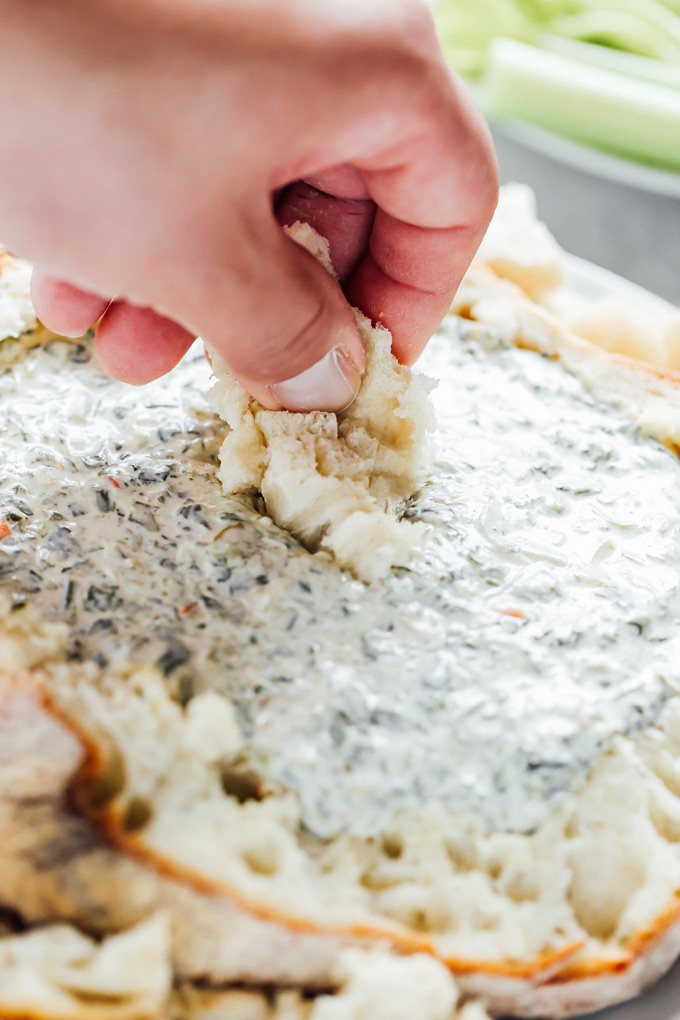 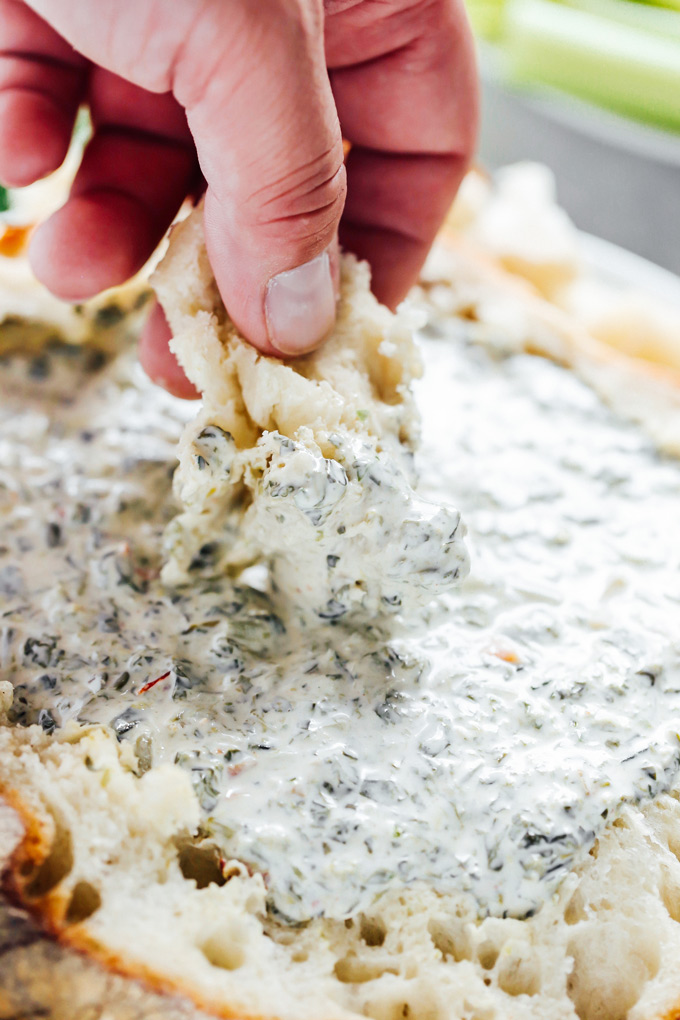 With that said if you want to stay strict keto that’s totally ok too! The spinach dip without the bread is absolutely keto friendly and you can use the other options I suggest below instead of bread. It’s a win for us all.

Spinach Dip is something I know will always be served at any one of my family functions. It’s so easy and irresistible you just have to have it. My one aunt always, since I was a kid, has put hers in a bread bowl. I think she started it off in my family way back when with making it and serving it this way. The bread bowl just gives it all kinds of sass. Obviously you’ll use the bread to dip in the vegan spinach dip but also you can use vegetables like celery, carrots and broccoli. So fun. You can do pita chips, pretzels, anything you want really. I’ve even seen someone put it in their leftover sandwich from Thanksgiving and Christmas with cranberry sauce and my oh my the deliciousness. *gasps* 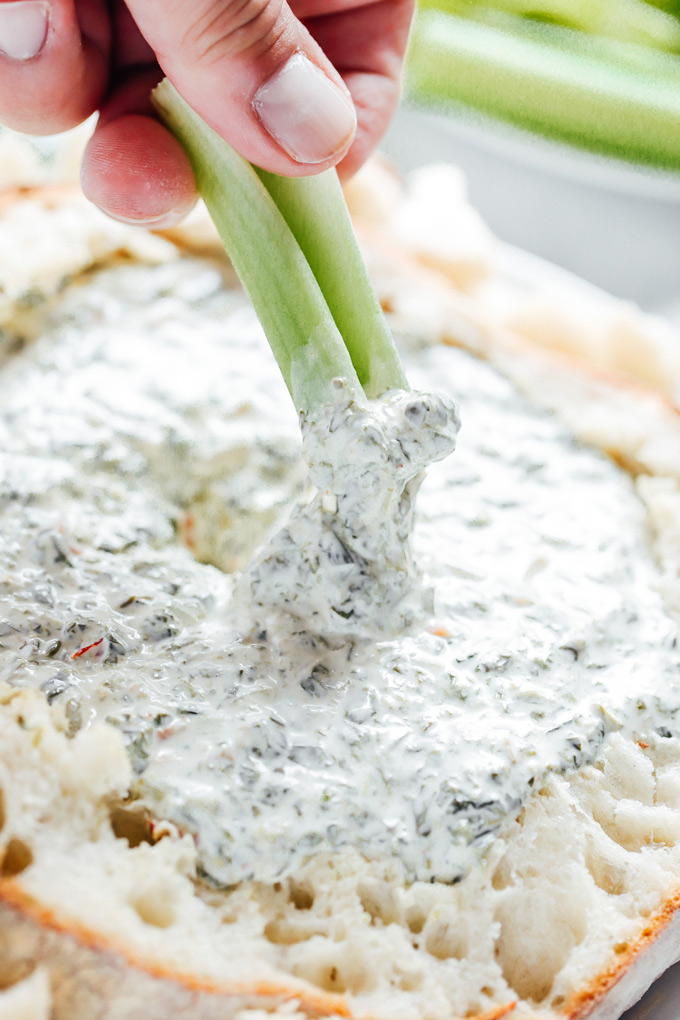 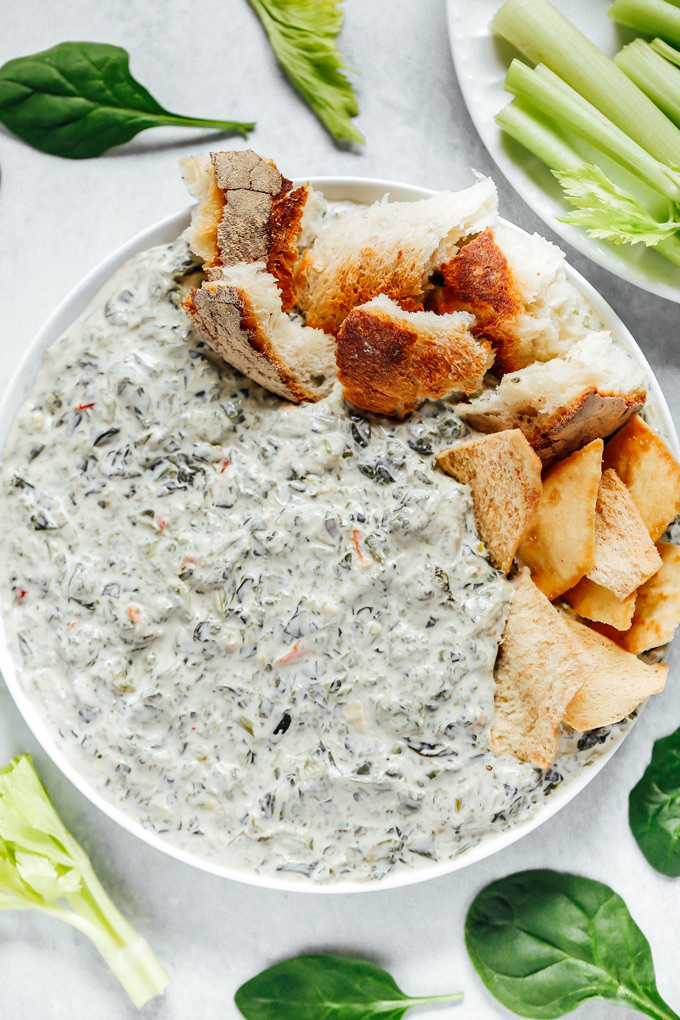 I took the traditional, classic recipe from the back of Knorr’s Vegetable Mix and just used all vegan ingredients. Veganiase is my absolute fave mayonnaise and I use Follow Your Heart Vegan Sour Cream. Honestly there really is no difference between the vegan and non vegan version. The one thing to be mindful of when you’re making it vegan is to be sure your vegetable mix is vegan. Some can have milk in it or say may contain traces of milk so use whatever you’re comfortable with.

Other than that this is all sorts of easy to make and always a huge hit. There are never really any leftovers especially after a party. People will start pulling away at the bread bowl itself like savages. LOL, myself included. But like, what’s it there for anyway, pfffft. ha! 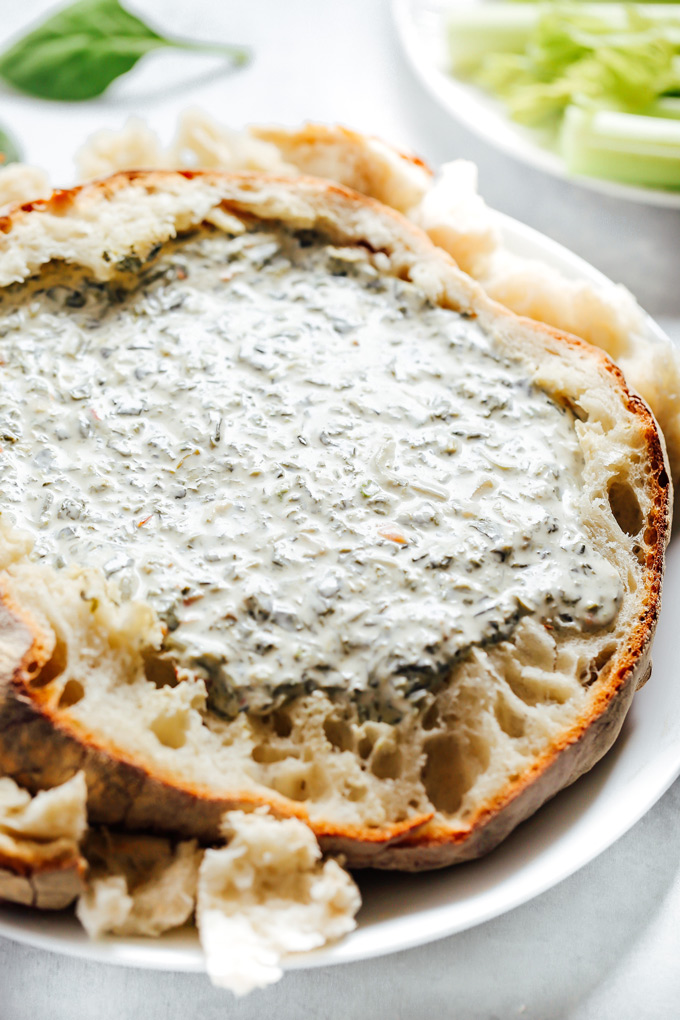 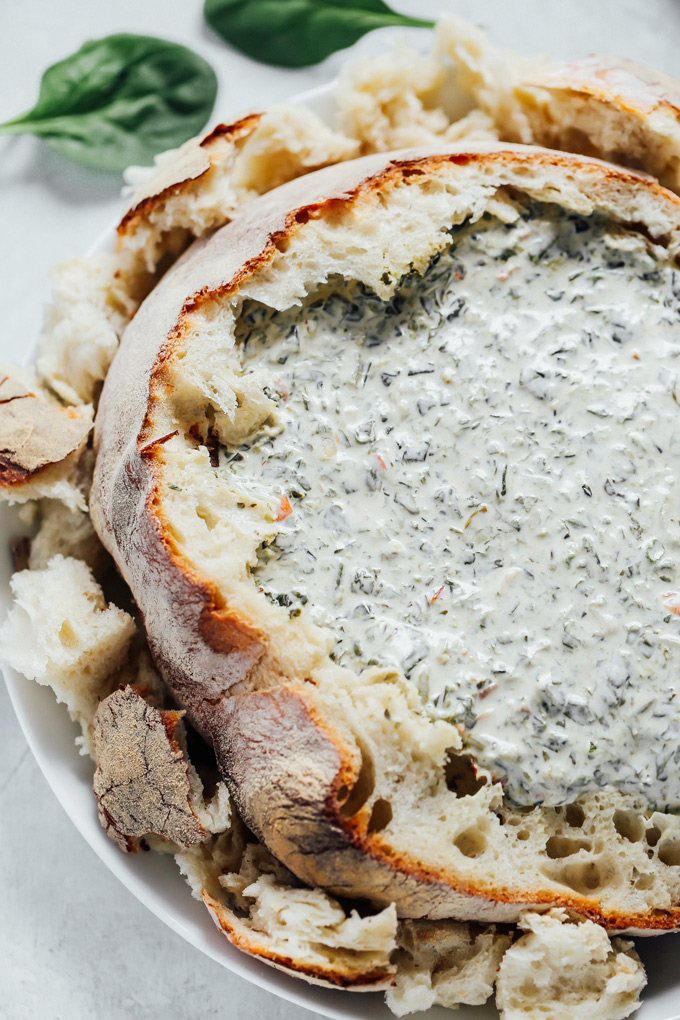 You can make this the night before or the morning of any big day. It just needs at least an hour or so to set in the fridge. Obviously I taste it while it’s warm and you can too, still good, but it’s just right when it’s been chilling in the fridge.

You can store any leftovers in the fridge in an air tight container too. Don’t leave it in the bread bowl, that will be no bueno. 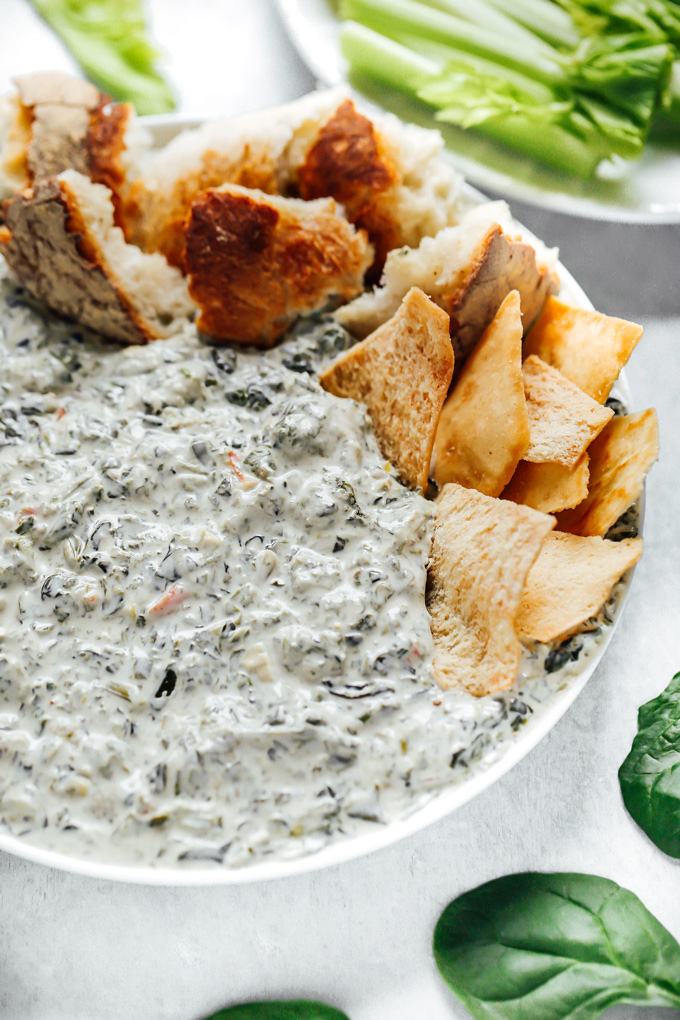 Can’t wait for you guys to make this Vegan Spinach Dip, I know you’re going to love it just as much as we do! Enjoy! 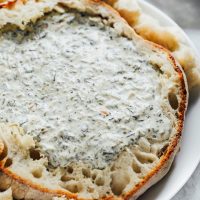 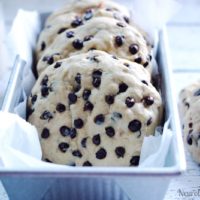 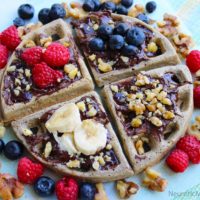 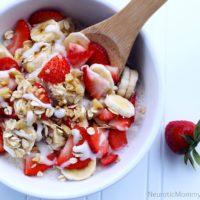